Surfing for Kids – my name is Kame (DRAFT)

Surfing for kids – My name is Kame

Surfing is Fun, and Surfing is easy if you get a little help from your friends. 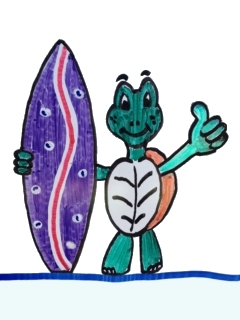 My name is Kame and I am a turtle that loves to surf. I live in Hawaii where lots of people love to surf in the warm water and smooth waves. Many people told me that Turtles couldn’t learn to surf, but I was determined to learn. So I found some friends to help me, and pretty soon I was riding waves and having fun surfing in the waves. If I can learn to surf then so can you. I think that if you believe that you can do it, and go out and make it happen you will succeed. It wasn’t always as easy as I would like, but it was always fun. Most people do not know that I am a turtle, because I look like a regular person, but my family ʻAumākua is a turtle, he is like our guardian spirit animal. And my family has always had a special connection to them. My mom says that some of my ancestors come back as turtles, and they always mean good luck for us. And my family has always had a special connection to them. That is why I love being a turtle too because I love the ocean, and it feels good to have a shell to hide in sometimes. 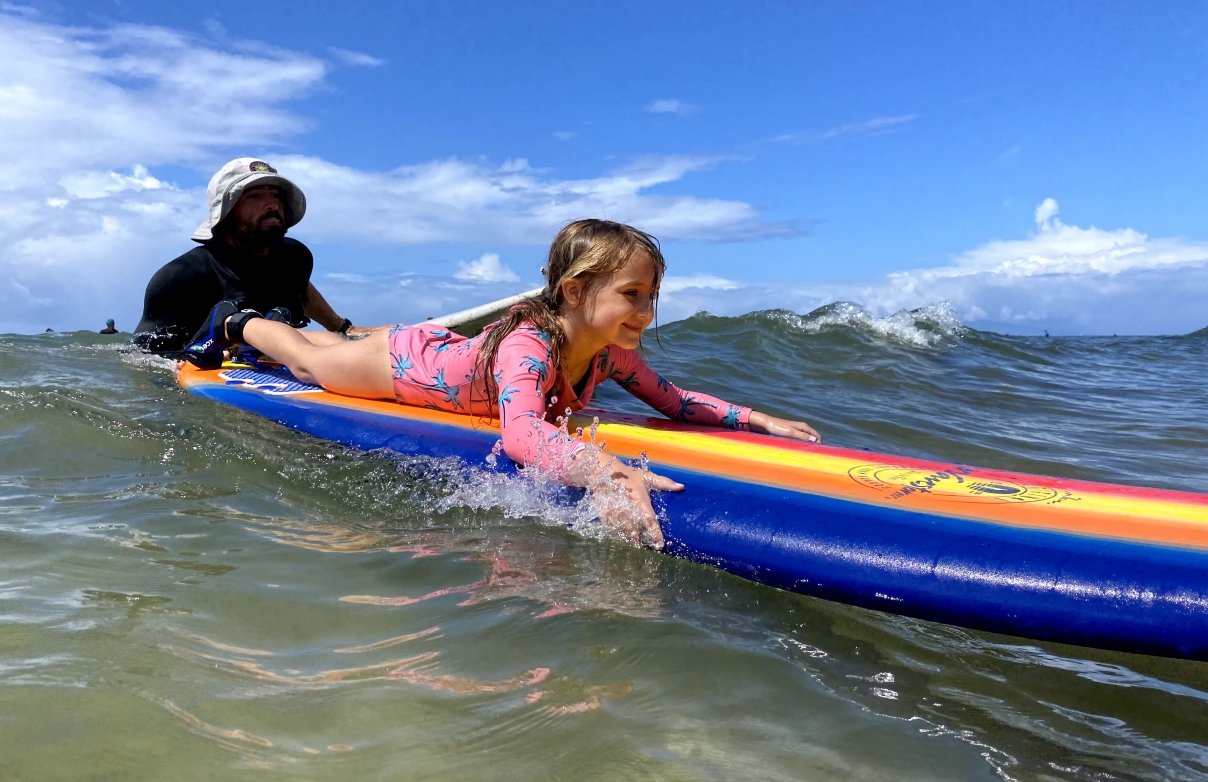 One thing I can tell you from when I was learning is that everybody falls off, and wipeout. but when you know what will happen it isn’t bad, and you can just get back on your board and try again.

At first, my goal was just to be able to stand on a board and look cool as I rode a big wave. And I thought it was going to be easy. That was because when I watched the good surfers they made surfing look so easy.

So one day I was watching some surfers riding big waves near my home and was dreaming about becoming a surfer, when one came into the beach and was standing close to me, and he said “Aloha”, which means Hello in Hawaii, so I said Aloha back to him. I said My name is Kame, and I like the way you surf. He said thanks Kame, my name is Kawika, and I love to surf. Then Kawika asked me, Hey Kame, do you surf?, and I was a little embarrassed, and said not yet, but I want to be a big wave surfer one day. He said, that is a great goal, maybe you should get some surfing lessons. And I thought I never thought about that, they have lessons for surfing? Then I said; “I never knew they had lessons for that, can’t you just get a board and paddle out?” And Kawika said, “you could try but you won’t have much fun and you might get hurt”.

And I said, “but lessons sounds like school, and I already go to school”. And then he laughed and said, “but you haven’t been to a Surf school…”. He said, “All surfers start out riding small waves at first, when they get better they learn to ride bigger and bigger ones,  The fun is in the learning”. Kawika said that “learning to surf is the fun part, and riding the big waves is just a small part of what it means to be a surfer”. I said “Mahalo”, which means thank you in Hawaii, and he said “Aloha” again, which also means goodbye.

That night when I was going to sleep I was thinking about the surfers I had seen catching the waves and getting long rides. I was also thinking about falling off in the waves and swimming under the water. I fell asleep with visions of surfing, and I had a dream that I could surf, and it was a very nice dream.

The next morning I woke up very early because my family was going to the beach. I didn’t know it then, but they had a surprise for me. We went to a different beach that has some rock pools for my little brothers to play in.  But when we got there I saw people were also surfing not far from the beach. It wasn’t giant waves like the day before, these were smaller fun-size waves. These waves looked a lot less scary than the big ones.

When we got to the beach, some of my uncles and aunties were there getting ready to go surf. Then I saw Kawika that I met the day before.  My mom took me over to talk to Kawika, and she said “this is Kawika, you can call him “Uncle Kawika”. In Hawaii “Uncle” means that he is a trusted family friend, just like a real uncle. Uncle Kawika asked me if I wanted to try surfing. I was excited and a little nervous, but I said yes. It felt like little butterflies in my tummy but I still wanted to go.  My uncle Kawika is an experienced surfer his whole life, and is a also a surf teacher. 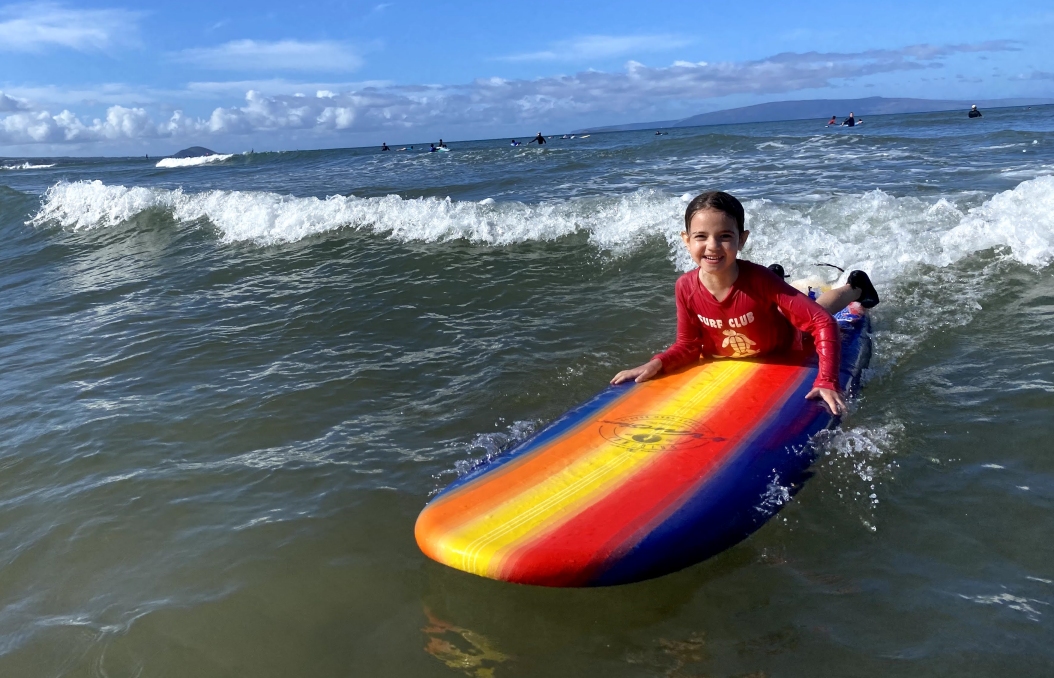 We catch some of the waves while lying down on our tummies. It is fast and fun. But you have to hold on tight. 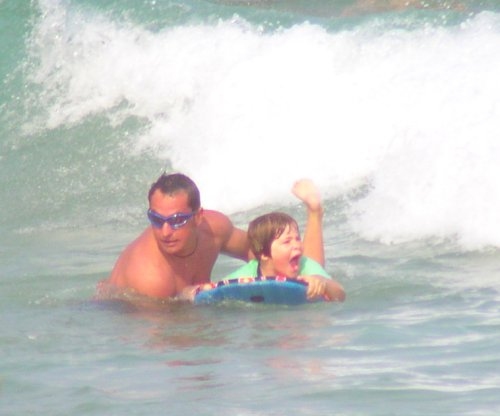 He asked us if we have ever tried to surf before, but we had “only tried bodyboarding”. He said that is bodyboarding surfing. He said that there are many ways to ride waves, and anytime you ride a wave it is called “surfing”. I felt better because I already loved riding waves on my bodyboard. So I thought that this was going to be easy.

Lots of younger kids try bodyboarding. Bodyboards are sometimes called boogie boards, it is the same thing. They are little boards made of foam. My friend Sol’s dad invented the bodyboard a long time ago, and now you can see them everywhere. Uncle Kawika told us that before boogyboards, old-time Hawaiians used to make them out of wood,  they called them “Paipo” boards, and they were just as much fun to ride, but you couldn’t go buy one in the store, they had to make them themselves. 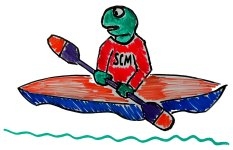 Another thing that I learned is that are lots of ways to surf. There are different ways to surf depending on what you are doing, and how you like to ride. They make different boards, and there are different types of waves too. So I learned that surfing is much more interesting and bigger than I thought before. Most people in Hawaii learn to swim and sometimes they go bodysurf. Body-surfing is when you catch the wave with your body and you don’t even need a board.  Not every beach is good for bodysurfing, you need a sandy beach and a gentle wave.

Another way people surf in Hawaii is “Paddle-surfing“, It is like a mix of kayak and regular surfing, You stand on a really big board but use a canoe paddle to go along. It is fun and you don’t even need a wave. Uncle Kawika told us that Hawaiians have been doing this for hundreds of years, but it just got popular lately. 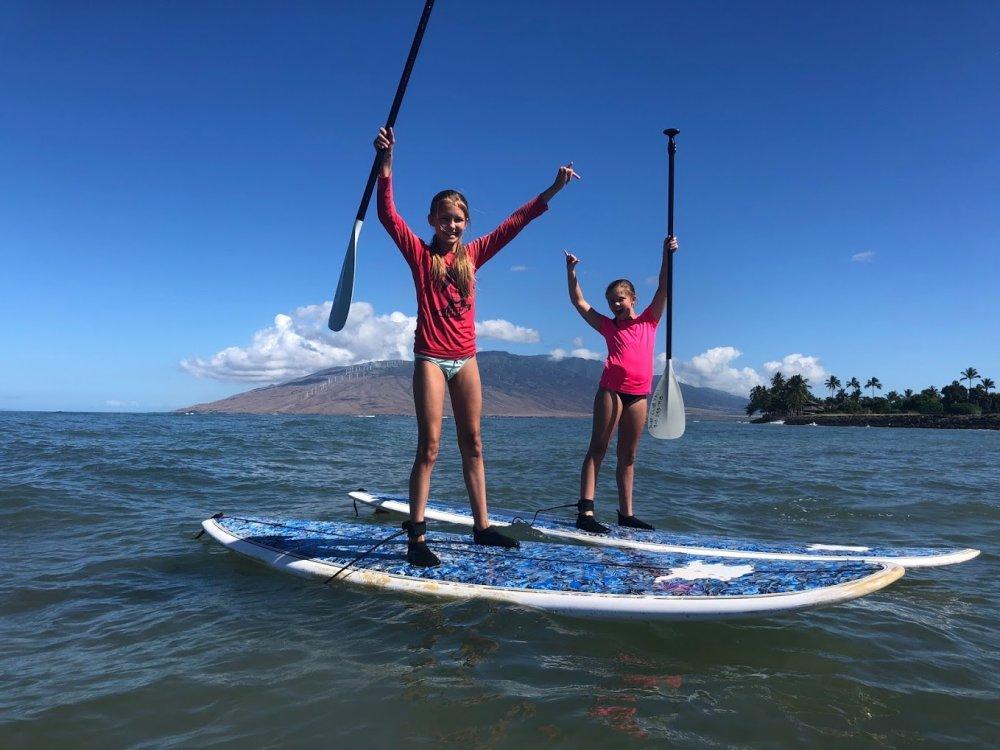 These girls are having fun on a SUP paddleboard.

Uncle Kawika shared many great surfing stories and taught us that Surfing is much more than just riding a wave, it is also understanding that nature is stronger than you, and that you need to pay attention and work with nature. He shared a lot of great tips with us. 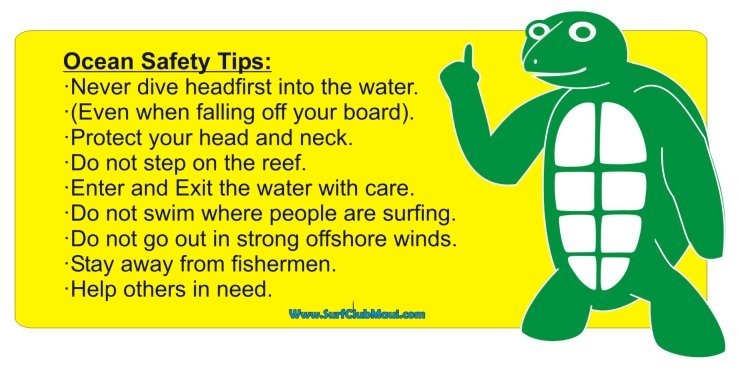 We started our surf lesson on the grass. He said that this was so we could practice how to get up on the board. He told us the names of all the the parts of the board, he told us about the fins, and the deck, the rails, and the leash.  We knew some of these words and we learned some new ones too.  Then he showed us exactly when to lay on the board and how to paddle the board using our hands.

When you start to feel confident, you can try to stand up and ride the wave, it is so much fun. “cheehoo”

Login
Accessing this course requires a login. Please enter your credentials below!
Lost Your Password?